The Story the Oklahoma CPA Association Did Not Want to Publish In Their Magazine!

The Story the Oklahoma CPA Association Did Not Want to Publish In Their Magazine!
By Terry Morgan, AIF & President of Ok401k, Inc. 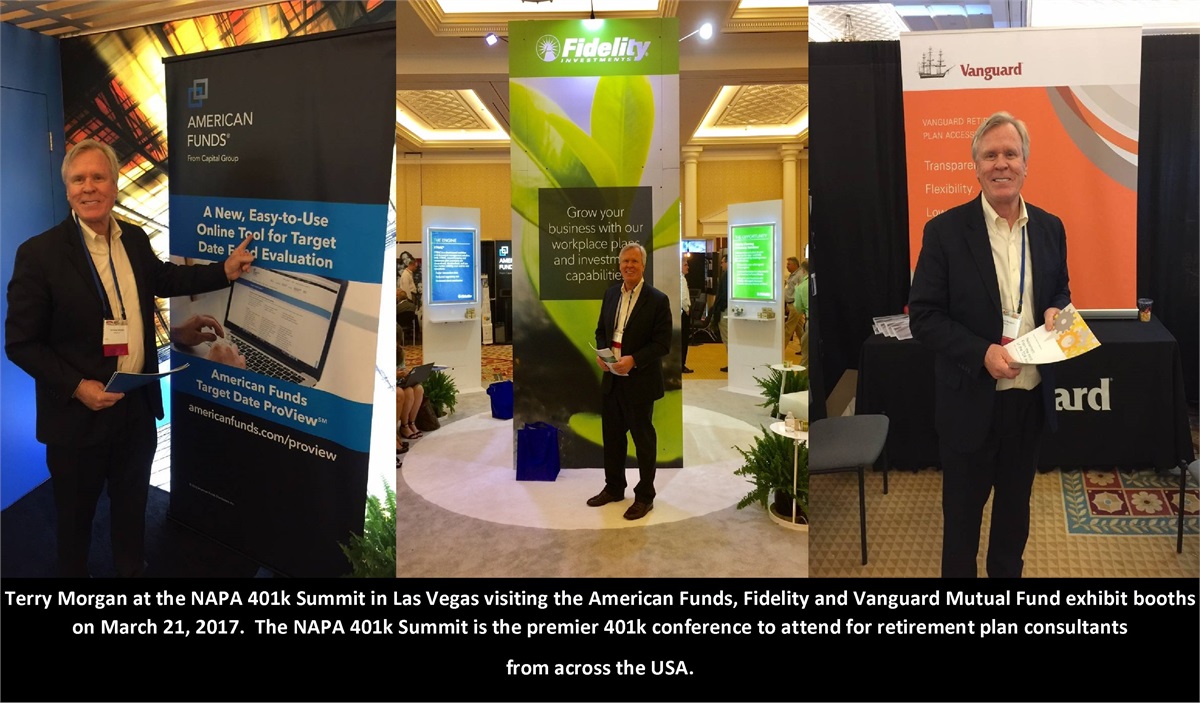 Editors note: In December 2017 I was hoping to publish an advertising/editorial in the Oklahoma CPA magazine about what I perceived to be about the phenomina of fake 401k advisors getting paid out of employee money to do absolutely nothing for the employer plan they serve. I thought that since so many great CPA's provide wonderful world class auditing to many hard working employer 401k plans in Oklahoma that they may be curious about this problem. Unfortunately their editorial board refused to publish it and after much inquiry with my many friends around the country that are experts on ERISA, the SEC and the investment and the insurance-mutual fund community it dawned on me that their was a reason why they did not want t publish it. One of the Association representatives did say that they "did not want to offend some of their advertisers." I was even offering to pay for the article as an advertisement.

Fake news, the phenomenon that is now taking the news industry by storm and distracting American’s on both sides of the political spectrum has now entered the 401k plan business with Fake 401k advisors that are supposed to work in your “Best Interest?” Fake news is made-up propaganda, brilliantly put together to look like first class journalism. It can spread on line faster than the speed of light and difficult to refute unless the target audience is interested to hear the other side of the story. The trouble is our country is so polarized on political issues most American’s won’t dig deep and look for another opinion. The same problem exists when it comes to supervising their 401k plan. Enter the world of fake 401k fiduciary advisors dominated by insurance agents and stockbrokers.

Many employers today are ill equipped to figure out if their advisor is a “real” 401k advisor or simply an intermediary tacking on an extra fee and someone else is really providing the fiduciary services need to run the 401k or DB plan. It’s a problem and many business owners, CFO’s and HR Directors simply don’t have the training or time to dig deep enough to ask who is doing what service, how much is being charged and what is being delivered to the plan and employees. I estimate that 90% of the time when we ask employers where their 408(b)(2) Service Agreement is from their advisor, they look at us with deer in the headlight stares. The DOL says that if your advisor does not provide you with this important document as of July 2012, they may put your 401k plan in jeopardy. The 408(b)(2) Service Agreement simply describes what fees your advisor is charging, what services they are providing and if they personally are signing on as a fiduciary to the plan. Many ERISA attorney’s are now saying that since the new fiduciary rule was implemented in June 2017 that this required mandate from the DOL has more importance than ever before. Unfortunately most of the time whenever we do a benchmarking of an employers plan the 408(b)(2) Service Agreement looks like a mutual fund prospectus. A mutual fund prospectus is a legal document that the Securities and Exchange Commissions requires mutual funds to file and be made available to potential investors. Employers are receiving today Service agreements that are quite ambiguous and misleading.

These sophisticated 408(b(2) service agreements are drawn up by a legion of attorneys that seem to be working for North Korea with obscure language so thick that most employers we meet with simply toss them in a deep and dark file somewhere.

W. Scott Simon is a State Bar member of California and a Certified Financial Planner. Scott writes a monthly column for Morningstar and is a nationally known speaker on ERISA.

A fellow 401k advisor I respect tremendously for his work in the 401k plan business writes a column for Morningstar each month. W. Scott Simon is a State Bar member of California and a Certified Financial Planner. Scott knows ERISA and the duties of the plan sponsor, advisor and what the participants deserve in a well-run 401k or DB plan. In one of his more recent Morningstar column this past October 2017, Scott writes about advisors that sell 401k plan services and the 3(38) services. He calls these services potentially "conflicted". I say it’s sort of like hiring an Accountant pretending to be a CPA and charging the same thing. Or, how about a para-legal pretending to be an Attorney and charging the same fee?

According to Simon, the Employee Retirement Income Security Act (ERISA) of 1974 allows for an employer to off load the selection and monitoring of the investments to someone else. Smart. Why not reduce the risk? I mean how many employers are trained to select and monitor the funds in their 401k or Defined Benefit plan and design their own Investment Policy Statement? Occasionally I run into an employer in Oklahoma and surrounding states that has some business owner or CFO who has too much time on their hands and who says he is the 401k committee and selects and monitors the funds. Sort of like doing your own end of the year taxes or self-dentistry. I ask these pseudo investment pros why take the risk? Most successful owners and executives I know want to run their business. Well run 401k plans today turns to ERISA trained fiduciary experts to select and monitor the funds which by the way is no easy task. By using a 3(38) fiduciary service the employer also reduces their liability as the plan sponsor. There are two fundamental fiduciary fund selection services an employer can turn to that allows them to have an expert select and monitor the investments in the plan. One is called a 3(21) which I like to call a “Co-pilot”. In this scenario you as the employer are still sitting in the Chief pilot seat helping to fly the 401k or DB plan. You as the employer are still involved and approving all decisions and your “Co-Pilot” advisor is making on the fund selection and monitoring. The other which we are focusing on today in Simon’s Morningstar column is a 3(38)-fiduciary advisor which I like to call your Chief pilot of the airplane. This pilot/fiduciary advisor simply tells you the employer to get out of the cockpit and go back and have a cocktail and enjoy the ride. You as the employer are off loading the legal responsibility surrounding your investment choices in the 401k or DB plan and allowing someone else to fly the plane. Very attractive service for any employer.

According to Simon, under ERISA, “A 3(38) investment manager accepts delegation from the plan sponsor to select, manage, and, if necessary, replace all (or some) of the investment options on a plan menu.”

You see insurance agents and stockbrokers that still sell 401k plans hate risk. Especially if their insurance agencies are big banks or wire houses and national insurance companies. And, since most of the time their job is to sell health or life insurance or the stock of the day and are not that well versed in ERISA, preparing an Investment Policy Statement or selecting and monitoring the funds, they simply transfer the 3(38) or 3(21) fiduciary services to some faceless RIA you may have heard of like Morningstar or Wilshire. Don’t get me wrong, these are great national RIA’s who happily take on this responsibility for the hapless broker pretending to be a fiduciary advisor. But they do not work for free. Unfortunately, the charade plays on though because these national fiduciary services allow the broker/dealers, insurance agencies and stockbrokers to still get paid as if they were doing the work. The brokers fee though is still on top of the employees money in the plan to do what? This brokers fees reduces everyones individual balance especially the owner or executives because they typically have the highest 401k balances.

Think of the incredible smoke and mirrors going on. Would you allow your Farmers or State Farm insurance agent to layer an extra 25 or 50 basis points on top of your home mortgage simply because he is your brother or the next-door neighbor and provides a great service to you and your family? Of course not. Yet, this ruse happens every day in 401k or DB plans arena. Great life or health insurance agents and stockbrokers with no ERISA training or 401k plan experience get paid huge sums of money out of employee assets as if they are the fiduciary advisor and yet someone else 1000 miles away is providing the 3(38) or 3(21) fiduciary service. What a country!

Some 401k providers say this service is “free”. Ary Rosenbaum a top ERISA attorney out of New York says otherwise. “There is no such thing as a free lunch because most of the time, free has strings attached.” Simon in his recent article reveals the “free” aspect of 3(38) services and how some of these RIA national vendors selection of funds may be conflicted. I say the same “conflicted” process is also going on in the 3(21) service. Anyway, Simon says “conflicted” 3(38) providers may not be providing the best investment choices available simply because the 401k vendor may have a certain amount of revenue sharing needed so the inventory of funds may be restricted. Simon continues: “In my view, there’s a significant difference in value between the direct and indirect provisions of 3(38) services. A 3(38) that provides its services directly is free and from the influence of an entity with the power to highly restrict the available universe of investment options from which an outsourced 3(38) investment manager. It will not provide those services itself but will instead turn to a Big Third Party 3(38) to provide them.” I totally agree with Simon because for over 10 years since these 401k fiduciary service has arrived on the 401k scene for pseudo 401k advisors I have found their inventory of funds to be very very suspect in share classes offered and specific fund families offered. Especially Target Date funds where over 70% of all employee assets are being deposited today. For example, you may have one of the following world class 401k vendors like Fidelity, VOYA, John Hancock, Principal or Empower serving your 401k? I use these great 401k vendors but in many cases do not use their own target date funds unless they pass muster. Ask them to offer another Target Date fund other than their own proprietary TD fund? You may hear some stammering and objections. But, if they allow a non-proprietary TD fund you may see higher administrative and/or recordkeeping costs. I believe that the same holds true when they are offering a 3(21) or 3(38) service for the plan. 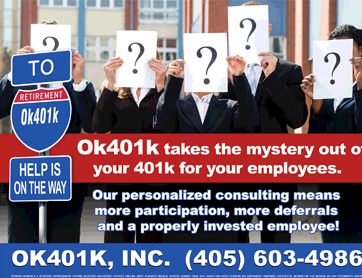 I have as an advisor for over 19 years in Oklahoma selling 401k plans increasingly seen how easy it is for anyone with an insurance license to look like a well-trained 401k fiduciary advisor by using these services. Don't get me wrong, these great life or health agent or stockbrokers are excellent in their licensed fields but when it comes to 401k plans, I feel they are overpaid and underworked all at the expense of the 401k participant. Most are pretending to do the hard work that an independent 401k fiduciary advisor can provide. Many times, my benchmarking of the 401k plan will reveal that Ok401k can provide the very same funds yet at lower share class expense and with more services to their employees without changing 401k vendors simply because the 3(38) or 3(21) service is according to Simon “conflicted.” Why pay extra investment expenses for someone who is doing absolutely nothing for you and your employees other than handing out enrollment kits? As a fiduciary, you have a duty to know.